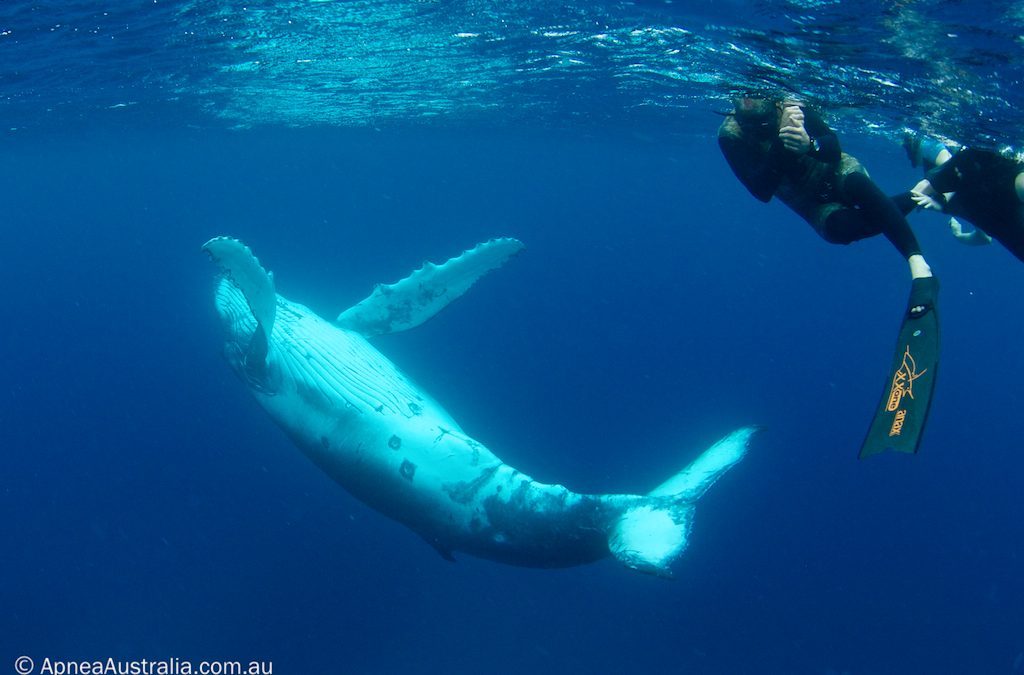 It started off as a great morning – Woke up to the sounds of gentle waves against the white sand just below our Fale (Bungalow).

After a quick breakfast, stretching and a briefing for the coming day’s diving we met on the beach with our gear.

An hour later and we find ourselves drifting in clear, warm bottomless water with 2 male Humpbacks showing off their underwater aerobics.

The first time we swam with the whales left us all speechless! it is one thing to spot a whale from a boat, and a completely different experience to freedive alongside of them in 30m vis’!!

This encounter was one of a few that took place during our Last FreeDiving with Humpbacks  expedition in Ha’apai, in the kingdom of Tonga.

About Tonga and Ha’apai

The Kingdom of Tonga is located in the middle of the pacific, Between Samoa and fiji.

Ha’apai is the middle group of islands south of Vava’u.

As we were looking for a different experience to the “normal” whale swim trips in Tonga, we chose Foa island. Ha’apai has only 3 Whale swim operators in comparison to 18 in the Va’vau group. This allowed us to spend more time in the water with the whales and not have to worry about “sharing the whales” with other boats.

The resort we have chosen was Matafonua resort that lies on the northern tip of the island, with easy water access (The Fales are on the beach), great snorkelling, great nature walks and awesome people and food.

This time, our group consisted of 8 keen Freedivers. a few months before the trip everyone received a training plan and by the time we left for Tonga everyone had a few “goals” for their diving. We had Guys that have only done their Stage A course along with Stage C and instructor level Freedivers.

As soon as we took off towards Foa Island on an old DC3 vintage aircraft everyone new we are on our way to an unforgettable trip! the sky was blue, the water- deep and clear, the reefs and atols were everywhere… A Freediver’s dream.

On the island, we made our way to the resort and checked in to our beautiful bungalos.

After a quick briefing everyone took the rest of the day to tour the area and snorkel in the shallow lagoon.

We have chartered 2 boats for 10 days- A catamaran for line training and a fast 8m inflatable boat for the whale swims and the more remote locations.

Each day had a specific goal – Technique, streamlining, equalization, relaxation… On top of the “regular” Freediving sessions we also had “extras” – Freediving the larges arch in the pacific, Freediving numerous swim-throughs and caves, nature walks and of course – Trekking up an active volcano in an attempt to freedive a lake that lies in the middle of the crater.

The first few days were dedicated to improving techniques and streamlining. We had 2 dive setups in variable depths. I believe the best way to improve is by training with likeminded freedivers and by viewing other people dive. Having a variety of levels allowed everyone to train with different divers, experiment different styles, attempt different disciplines and develop a bond with each-other.

On our 4th day of diving we traveled to a nearby island where the largest underwater arch in the pacific is located. The arch lies in 25m of water and is almost 25m in length!

We were pleased to see that all of the divers were happily swimming through the arch, playing safety and filming each-other.

Providing the fact that at least four of the divers were diving to around 18m’ before the trip, 25m dives seemed very easy to everyone…

At the end of the next day we sailed to the nearby island and had a picnic. We split open coconuts and shared some gourmet noodles and pizza. Then, we went exploring the multitude of caves and swim-throughs that line the island. Most of the “canyons” are 15-25m in length and lie in 5-10m of water, but some are 50 meters long and more and terminate in huge cathedrals! The guys had a great time and came back with lots of good stories to tell.

During the 10 days we have spent on the island the guys had the chance to go and try spearfishing. We timed the tides and were lucky to have a day where the wind dropped, which allowed us to dive the east side of the island. The reef on the east side drops quickly to around 35-40m and even though we didn’t catch much we saw a doggie, schools of barracuda, Mangrove jack and other nice fish.

Now might be the time to share the fact that we always aim to provide unique experiences on our trips. While researching the area as part of our preparation we came across an active volcano located 70km off shore from the island. further research resulted in the “discovery” of a 500m’ deep lake in the crater! As no-one has ever dived the lake there was not much information to work with… the information we gathered from locals said that it should take between 1 and 2.5 hours of climbing the volcano and down into the crater. We left at first light and passed the 2.5 boat ride watching the mountain getting closer and closer. Once we arrived we came across our first obstacle – the see was rough and the waves were breaking where we planned to get off the boat. The alternative was to jump off the boat onto the rocks and leave the boat beyond the waves. We began the climb up the mountain each carrying their freedive gear (along with food, water and cameras).

An hour and fifty minutes later and we were on the top of the mountain- looking into one of the most amazing sights I have ever seen! On the right – an active volcano, blowing smoke  and surrounded by red barren slopes. On the left- a blue, deep beautiful lake, with lush vegetation and birds… such a contrast in such a small place.

Unfortunately our timing was “a bit off” – while climbing the mountain we met a local that told us that the actual path that leads down to the lake is located just past the volcano. We decided to try and walk around the lip and climb down into the lake, knowing that we might not have enough time do get there and back in time for the boat trip back.

It took us another hour and a half to get to the volcano and as we were sitting on the lip, watching the path in the distance, know we were defeated by the mountain!

We made our way back down to the boat, all the time planning the next time we get there. Everyone was super motivated to go back and dive the lake. Next time we will have a two day trek with camping on the mountain!

On the way back to Foa we jumped in the water and swam with some whales that were friendly enough and allowed us to play with them for a while before we had to get back on the boat and head home.

What a Day!!! no-one would have missed this experienced for anything.

The highlight of the trip was of course the opportunity to swim with the humpbacks! those majestic mammals travel thousands of miles each year to calve in the pacific. Tonga is one of the only places on earth that allows swimming with them. The rules are strict, with only 4 swimmers in the water at all times and the whales are the ones that will decide weather to get close or not. Some whales had their own agenda and swam away when we got close to them while others actually came closer. The Humpback sings for hours and the song can actually be heard from miles away. It is an amazing experience to be in the water and hear the whale-song- it vibrates through your whole body and touches your very core.

We were lucky to have friendly whales that came within almost an arms reach. We could really feel the intellect behind those great eyes. As there aren’t many whale swim boats around we had the chance to spend hours in the water with the whales and observe them resting ,playing and diving. They are so graceful in the water and can swim fast without almost moving their tail. They can fully breach out of the water in less than 10m’ of water.

On the last evening we had a classic Tongan feast that included roast pig, seafood, roots and local dances. After the feast we had a traditional Cava ceremony (cava is a root that when mixed in water causes your mouth and body to go numb and that those of us that have experienced it in Vanuatu had not much motivation to try again.

On the way back to Australia we were already dreaming about the next time we would freedive with the whales. We kept having dreams about whales and clear warm water… We shared a life changing experience and cant wait to go back next whale season.

We are using cookies to give you the best experience. You can find out more about which cookies we are using or switch them off in privacy settings.
AcceptPrivacy Settings

You have Successfully Subscribed!