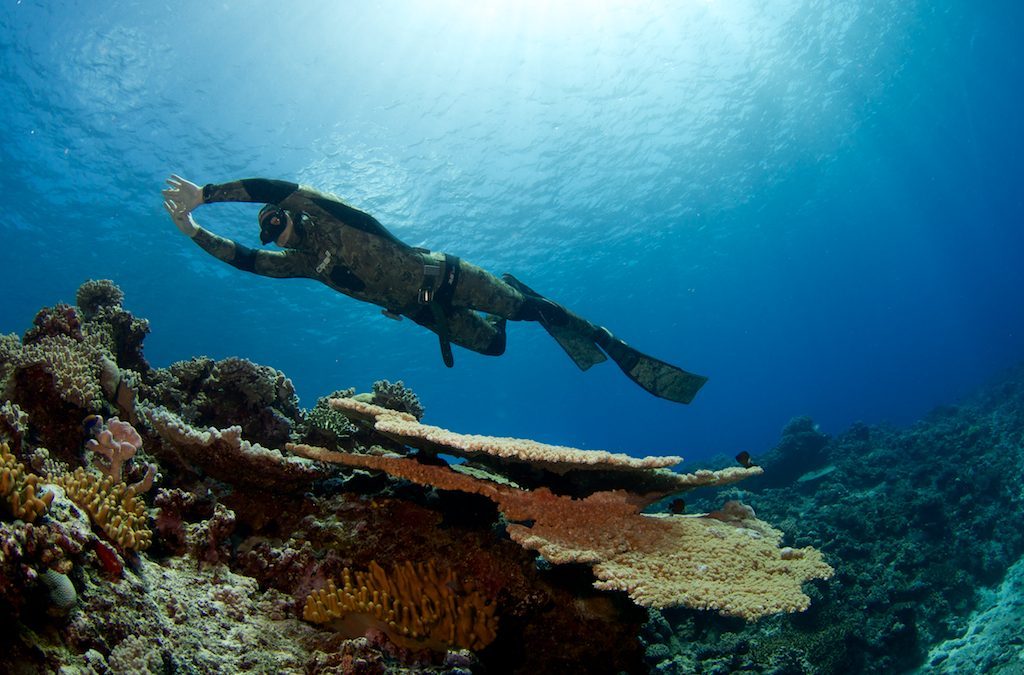 “Realize deeply that the present moment is all you have. Make the NOW the primary focus of your life.”

And I thought that I have seen it all… Freedived the best spots, the most amazing drop offs, with dolphins, manta rays, sharks, dugongs… I was wrong.

Before I share my experiences from this year’s trip to Tonga I wish to start with this:

FreeDiving has been growing exponentially around the world and Australia is seeing an amazing spike in awareness and exposure due to some fantastic performances by some very gifted athletes. We have had a few high profile competitions, some TV appearances and regular representation in international events. Training clubs are active in most major cities and Facebook is full of FreeDive related posts.

We are also seeing a huge increase in the number of people wanting to actually learn how to FreeDive. Many spearos begin to see the value of correct preparation, proper breathing and training for their favourite activity. Many spearos also realise that there is more to spearing than just catching fish.

Unfortunately, we are also seeing more accidents. It is critical to understand that with the development in technique and gear, new FreeDivers seem to improve very fast, sometimes at the expense of missing out some of the most important aspects of the sport – Enjoyment (from the recreational part of the activity) and adaptation to depth through months /years of diving. Lack of enjoyment might lead to a drop in motivation and early “burn outs” but Lack of Adaptation might lead to accidents such as squeezes and blackouts.

We always try to emphasise the importance of progressive improvement and focusing on the way rather than the end result, especially for beginners. Taking your time in training and progressing methodically will usually deliver great results with less risk and more great memories.

FreeDiving is more than simply holding your breath and trying to swim as deep as you can, as far as you can or as long as you can, it is a lifestyle, a way to explore this precious space that lies between two breaths.

Each year we spend a couple of months in Tonga, Swimming with Humpback whales, exploring new reefs, practicing Yoga, training and mainly having a great time.

Tonga offers some of the best FreeDiving I have done, with deep, clear blue water (and vis that regularly exceeds 35m), minimal currents and awesome drop-offs.

As FreeDivers we tend to get caught up with the whole “Diving on the line” thing. People fly half way around the world for a training camp and don’t even bother to explore the surrounding area. We have made a point of finishing almost every session with a bit of snorkelling. This gave us the chance to play with Manta rays, Turtles, Octopus, clown fish and the occasional Leopard shark.

On all our previous trips we have allocated a day to a Dive spot called the Arch and a day at a spot called the caves. The arch is an underwater structure that lies at a depth of around 29m. It is around 25m wide and is considered to be the largest arch in the pacific. Water clarity is usually fantastic with 45m vis’ being quite common. Freediving below the arch is a great experience and could be done at a depth of 21m (with a 8m horizontal swim).

As it is located on a 45m drop-off many fish regularly visit the area and it is common to spot sharks, turtles, rays, wahoo and Dogtooth Tuna. I have already written about the Arch on my last article so I will just say that it is one of the most amazing places to FreeDive.

Last year, on one of our Arch days we have discovered an unexplored patch located inside a sheltered bay on the other side of the island where the arch is located. We have planned to return to the spot this year in order to check it out as it looked promising from the surface.

The day began with an awesome training session at the Arch – Almost everyone in the group had the chance to swim through it and those who didn’t had fun watching from the surface or FreeDiving to the top of it.

We have already Freedived the Caves the previous day so everyone knew how much fun this type of FreeDiving could be. We picked up the anchor and sailed to the other side of the island where I dropped into the water in the spot we have found last year. The plan was to scope the area and see if I could find an interesting point to dive…

I WAS BLOWN AWAY! Even before I jumped in I knew the place was special- the water had this unreal colour and clarity. As soon as I looked down I discovered that I was on top of a huge boulder riddled with cracks and crevices. As the depth was around 18m and the top of the boulder was at 6-8m the cracks created a Canyon with 10m+ walls. Light was shining through and the sand on the bottom of the cracks reflected onto the walls. I called the rest of the group into the water and we began exploring. As planned- we divided the group into smaller teams where a FreeDiver would have two safety divers – one at the entry point and one at the exit. We started shallow and with swims that were open topped and gradually increased the depth and the “complexity” of the dives by finding over-hangs and swim-throughs.

It took me two days to wipe the smile off my face! I am not kidding.

We explored the area over the next 2 months. Each trip included at least one visit to the cavern and on each visit we have discovered more options. We have found a crack that opened into two long passages- to the left, a narrow cave that terminated with a round opening that was hidden under a ledge on the side of the reef. To the right – a square corridor that looked as if it was carved by a machine and that was around 25m long. It terminated on the other side of the boulder. We had fun diving below the breaking waves near the island and in the turquoise water between the many reef formations.

On the fourth trip we have even found another arch! this one a bit deeper (entrance at 35m) and smaller. As we have just finished our depth session we did not want to try more deep dives so this particular site has not been dived yet.

We have also found a big hole that led to a big swim-through at 18m.

FreeDiving such a place introduces a few complications: As in some cases there is no way to come up anytime you like, the divers had to perform “test dives”. These dives followed the route of the swim-through/cave but were performed outside. This allowed us to estimate time and depth without having to discover it on the “live” attempt.

In many cases divers discovered they could actually dive deeper / farther and for longer durations when exploring the caves. This is a result of distraction and a different head space in relation to diving on the line. Obviously we did not explore very deep swims and the groups were formed in a way that will allow everyone to dive well within their comfort zone.

Another issue is the surge. On the more windy days and when the swell was a bit bigger we experienced a bit more surge. When planning the dive we had to take into consideration the added effort required when swimming against it inside a cave. In all cases, the more advanced FreeDivers / instructors were the first to go through a new spot and only then the less experienced divers followed.

Sitting on the bottom inside a cavern, the light penetrating through the hard corals above, schools of fish swimming around you, the sounds of the distant whales… Priceless.

Besides the FreeDiving and snorkelling we have held daily yoga sessions (First thing in the morning), had some amazing meals, hiked around the island and held a Slack-line comp.

Oh yes- there were whales too ☺

This year we experienced some of the most amazing encounters we have ever had! Mothers and calves, heat runs, Playful sub-adults, Singers, groups of whales traveling together and lots of Breaches! We even managed to capture a few whales breaching all the way out of the water. Nothing on earth compares to sharing the space with those magnificent creatures and we have all felt blessed to be accepted by the moms and calves. The intelligence behind the eye of a whale is breath-taking.

We are already planning next year… Can’t wait to be back.

We would like to thank all of our guests and hope to see everyone in the water again.

We are using cookies to give you the best experience. You can find out more about which cookies we are using or switch them off in privacy settings.
AcceptPrivacy Settings

You have Successfully Subscribed!